Located at km 97 on the right margin of the Paraná de las Palmas, Campana is in the province of Buenos Aires and has a population of 86.000. Besides having considerable port and commercial activities Campana also has a good industrial infrastructure; outstanding are TENARIS SIDERCA, the manufacturer of seamless steel pipes and the ESSO oil distillery, among other industries. The Santa Fe-Buenos Aires highway offers a good connection with the main industrial centers as well as with other highways into the Pampa region. Located 10 km from the Zárate-Brazo Largo bridge, it has good connections with Mesopotamia. The Nuevo Central Argentino railway connects it directly with Rosario, Córdoba, Santiago del Estero and Tucumán. 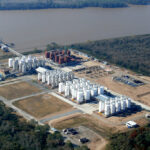 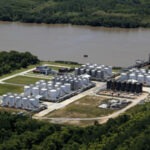 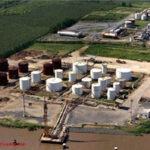 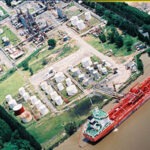 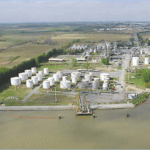 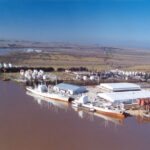 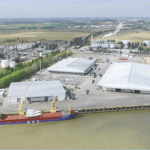 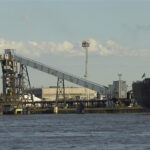 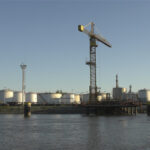 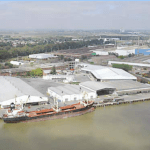 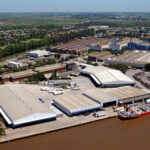 Campana is a port situated on the right hand margin of the Paraná de las Palmas, the branch of the Paraná river on which the Mitre Channel is located. It is about 75 km NW of Buenos Aires by road and is the home of Siderca steel mill which produces steel piping. It is also growing as an alternative port to Buenos Aires for certain cargoes, particularly fruit.

In the fairway depths range between 15/18 m (50/60 ft). For depths alongside quays and jetties see individual berths.

At Campana the tidal effect in the River Plate is experienced, HW and LW usually being about 4 hours after Buenos Aires and of a lesser intensity. In addition the river level can be affected by the prevailing wind. SE´ly gales (Sudestada) in particular being capable of increasing the level by as much as 60 -90 cm (2-3 ft).

For vessels proceeding down river and requiring to be swung, the use of one tug is compulsory for vessels exceeding 157,5 m LOA (or 194,25 m for vessels fitted with bow thruster) Use of tugboat may be avoided by proceeding up-river and swinging at km 120. Use of tugs by exempted vessels may be recommended by port pilots under certain wind and/or river current conditions. Normally up to four tugs (1350 HP) are stationed at this port. Or at Zárate, about 6 Km upriver.

Fuel, diesel and gasoil locally available. Requests should be made in advance (at least 48 hours) in order to complete documentation. Can be supplied via tank trucks or barges (depending on quantity) except at Esso berths where by pipeline only.

Two local firms have equipment for assistance, salvage and underwater work, including 2 tugboats of about 200 and 90 HP, one fitted with a crane of 7 tons SWL.

Mobile cranes can be hired from private companies.

Workshops available to carry out minor deck, engine and electrical repairs. Underwater services available. For bigger jobs it is convenient to make suitable arrangements with larger workshops/shipyards at Buenos Aires.

Available at Carboclor Jetty, of about 10 m length.

Dischargeable at Carboclor berth. Can be arranged by road tanker at other berths providing early advise given.

Available locally. For large quantities convenient to arrange through shipchandlers at Buenos Aires.