San Nicolás is the northernmost city in the province of Buenos Aires and has abt. 130.000 inhabitants. The town has an important commercial activity that serves a vast farming area. The main industry is SIDERAR, the largest steel mill in the country, and there is also a large power plant. It is served by the Nuevo Central Argentino railway which connects the city with Santa Fe, Córdoba and the city of Buenos Aires. The Santa Fe-Buenos Aires freeway offers a good connection with the main industrial centers as well as with other highways into the Pampa region. The closest commercial airport is in Rosario, some 60 km away, with domestic and international flights. 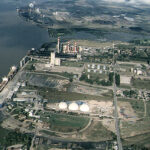 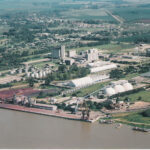 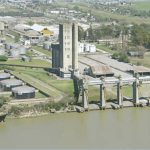 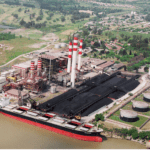 There are several official anchorages for vessels obliged to wait off Puerto Buitrago, Ramallo, San Nicolás and Villa Constitución and Masters and Agents should ensure that Pilots are properly instructed in this respect to avoid possibly having to shift anchorage if there is any misunderstanding.

5/2 days preadvise to berth operators. Once berth assigned Coastguard (PNA) to be informed.

Not compulsory for berthing/unberthing, however port pilots may suggest the use of tugs under certain conditions, according to vessels LOA, maneuver or berth. Nearest available tugs stationed at Villa Constitución. Please contact your Ship Agent for further information.

Should it be necessary, bunkers can only be supplied in small trucks or trailers.

Available by barge or truck.

Fitted at all berths.

Supplied by pipelines to all berths. Supply rate about 6 TPH.

Available at elevator berth only.