Hidrovia River Parana/River Paraguay: The tender for renewing, or replacing, the waterway dredging and buoying between Recalada and Puerto Caceres (Bolivia) is due March 2021. The tender is for dredging from Recalada up to Santa Fe and buoying from Recalada to Puerto Caceres in Bolivia. The first tender was awarded to a consortium led by Jan de Nul in 1995 and they are interested in renewing for a new period. Additionally Shanghai Dredging are interested to offer for the upcoming tender. Meantime, the National Government have decided to set up a National Entity called Hidrovia to oversee the maintenance and administration of the waterway and to draw up the plans for implementing the tender and the administration of the contract. There is still no news as to the characteristics of the improvements on the Canal.

ACA Timbues: The mv HAKATA QUEEN is expected to complete loading operations at ACA Timbues tomorrow Wednesday September 09th am. The loading has progressed well and no major problems were encountered.
Imagen 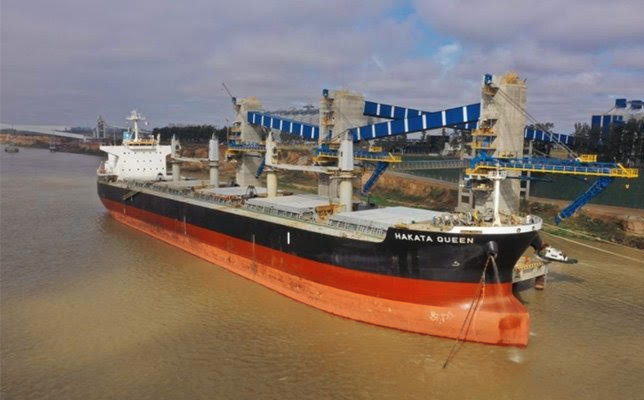 River Parana Draft: The water level forecast until mid-November 2020 has been issued by the National Water Institute. It is encouraging to see that the according to their forecast the water level on the Parana will begin returning to better levels by mid spring. As a guidance parameter, the lowest level of the River Parana, measured at Rosario was 0.60 meters.

Maize: There are rumors in the market that severe weather in China has damaged their maize crop and that imports of this commodity may have to be doubled. The imports of maize into the EU are also expected to be strong and the import duties are still at zero.

Recalada: Recalada, and Zona Comun have closed due to swell, fog and high winds.

Necochea: The port has been open since September 03rd at 0730 hours. It had last closed on Saturday, August 29th at 1640 hours.