Maize: There is a significant amount of confusion in the local market regarding a supposed “ban” on maize exports. The Government has called for the suspension of further issuing of maize export permits as from now. This does not mean that maize shipments will be stopped. It means that contracts for future sales will be suspended for a period.

Wheat-Argentina/Brazil trade: After all the upset last week regarding the Argentina/Brazil wheat trade the Brazilian Government announced that a decision on the supposed GMO wheat has been postponed until further dates. In the meantime it has been reported in the press that Bunge has purchased sensors/machinery which they claim will allow them to detect this GMO wheat prior to taking delivery.

Crew changes in Argentina: The Government has announced that crew changes are to be allowed starting October 20th. Details of the requirements for incoming and outgoing crew are expected to be laid out during this week as advised by Sanitary and Immigration Departments. We will advise soonest they are published.

Necochea: Necochea no longer requires arriving vessels to comply with a 14 day quarantine. This brings the port back into line with the rest of the country.

River Parana draft: The lack of rain over the River Parana basin remain of concern to the whole area. In Brazil there is a shortage of water in the hydroelectric generating dams and lower down the River the water shortage is expected to last into the foreseeable future. The forecasts issued by INA (Argentina’s Water Institute) are very pessimistic. Please see below. The ports on the River Parana which are in the more stable River draft area (Delta Dock, Terminal Del Guazú and Las Palmas) are doing brisk business completing vessels with part cargoes of average 7,000 tons in order to complete sales contracts. 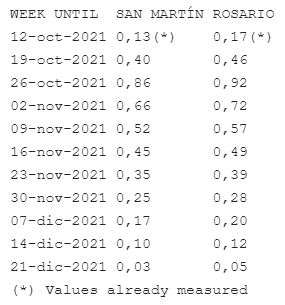 We urge you to consult prior load completion of vessels bringing inbound cargoes to Upriver ports.

Bahia Blanca – Tug service: Tug boats are now working for 12 hours per day, every day. The 12 hour work period will be counted as from the first service of the day. After this period is finished there will be no further services during the next 12 hours. Necochea has been applying this procedure for the last few years. This is due to a wage dispute between crews and tug boat owners.

Scrubbers. The restriction to use open-loop scrubbers was regulated/prohibited on Aug 2020 (Disp 15/2020), but shortly afterward the application of this regulation was ‘suspended’ by the authority (Disp 20/2020). Therefore, at present time no specific regulation/restriction applies regarding the use of scrubbers in Argentina waterways, at least, until further notice. Besides scrubbers, any other wash water discharge is strictly forbidden in riverway and seaports and to be carried out as per MARPOL Annex V.

Crew changes made at previous port/s 14 days prior arrival in Argentine ports: Besides many other documents and certificates, these below are of special concern: