Necochea and Bahia Blanca:Both Bahia Blanca and Necochea stevedores are demanding a 14 day quarantine for vessels calling at these ports. The 14 days are counted as from the day of departure from the last foreign port of call. This period to count even if the vessel has been granted Free Practique and called at another Argentine port. These are local issues and must be solved locally. Meetings with the unions have been held, but so far no agreement has been reached.
WE STRONGLY RECOMMEND THAT YOU CHECK WITH US BEFORE FIXING VESSELS ORIGINATING FROM BRAZIL, CHILE AND URUGUAY.

San Lorenzo, tanker at ADM AGRO PGSM: On Wednesday 24th a tanker arrived at San Lorenzo Roads coming from Madre de Deus, Brazil. She was granted Free Practique as per usual procedures and berthed on Friday 26th at ADM AGRO PGSM to commence loading operations. During berthing maneuvers one of the crew collapsed on deck with breathing problems. The vessel’s Free Practique was withdrawn and all the crew were tested for Covid-19. Six of the crew tested positive and the vessel was shifted to Roads today and will be submitted to quarantine.

River Parana Draft: The River Parana draft forecast is now revised downwards. The lack of rains that had been forecast over the catchment area in South Brazil, Paraguay and Eastern Bolivia has produced a revision of forecasts to an average river draft of 10.10 meters. This is adjusted daily by the port authority. The referential value for a maximum permissible sailing draft less than 10.36 meters (34 feet 00 inches) is with a River level of 2.00 meters at Rosario.
Please find hereunder the forecast of River Parana level prepared by INA (National Water Institute). 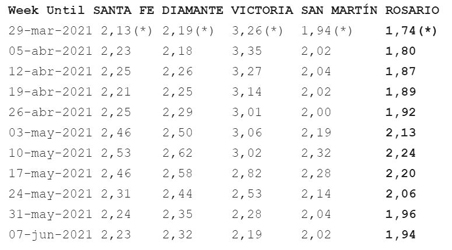 River Plate and Hidrovia: In what serves as a “ceremonial” the first buoy was laid for what will be the Magdalena Channel, a new southern canal into the River Plate along the Argentine coast, south of Recalada. Funding for the dredging has not yet been allocated but there is political pressure from the southern Atlantic ports (Mar del Plata, Necochea and Bahia Blanca) for a shorter access into and out of Upriver. There are many opinions on the subject (This is Argentina after all). Those in favor maintain that the new Channel will be cheaper to maintain because it is shorter and the that the flow of water will “self” dredge. Those against hold that there is no infrastructure for services at the ocean end of the Channel, that the weather conditions at “Bravo” anchorage are worse and less sheltered than at “Alfa” off Montevideo. Also that the greater distance will add up to one days sailing time for vessels heading northbound. 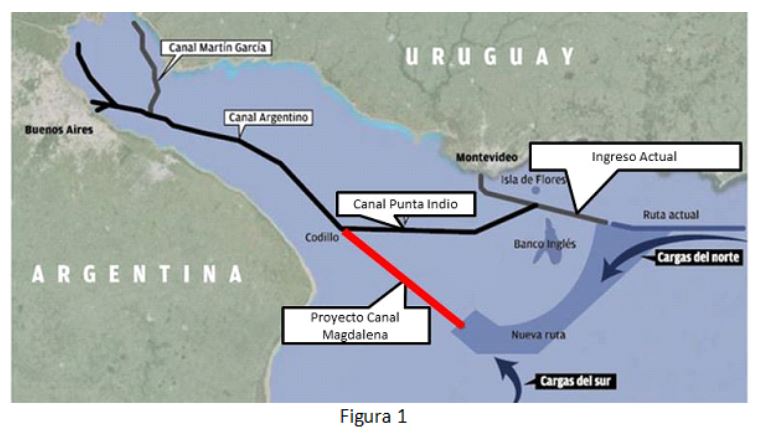 Bahia Blanca, bunkering: The CoastGuard has authorized vessels lying alongside at LDC Argentina berth in Bahia Blanca to perform bunkering operations while loading. As from now the only berth where bunkering is not allowed during loading is Profertil. As an alternative bunkering can be performed at Bahia Blanca Roads, Buoy 11. 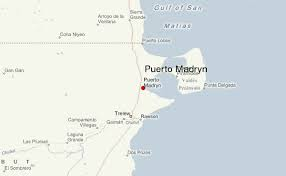 8.50 meters depth alongside at zero datum

Please follow our Daily Draft Report where it is updated regularly.