San Lorenzo, strike: The Oil Crushers’ Union has called for a 24 hour strike at San Lorenzo tomorrow, March 19th. The strike has been called out due to the firing of the Buyatti S.A. staff brought on by the closure of the plant in San Lorenzo. It remains to be seen how many other unions decide to join this action. It will be known tomorrow which terminals are affected.

Covid-19 Quarantine Restrictions: An update on the quarantine restrictions. With the onset of cooler weather (Southern Hemisphere Autumn) and the arrival of the “2nd wave” the Government is planning further restrictions on movement between provinces and entry through international borders. Details are still to be announced.
Bahia Blanca: Authorities at Bahia Blanca demand that all vessels proceeding from a foreign port perform a 14 day quarantine before being granted Free Practique and allowed to berth. The 14 days are counted as from the departure date from last port of call. Vessels proceeding from Brazil, Uruguay and Chile can be excepted from this 14 day requirement provided a permit is requested from Port Administration, and upon berthing a fumigation of the living quarters must be performed.

Necochea: At Necochea a 14 day quarantine period for vessels coming from foreign ports is required. Exemption is granted for vessels proceeding from Brazil and Uruguay after a formal request is made to the Port Administration.

River Parana Draft: The River Parana draft forecast is maintained at the present River level. An average of 10.40 meters is adjusted daily by the port authority. Rainfall over the “catchment” area of the River is returning to usual volume. 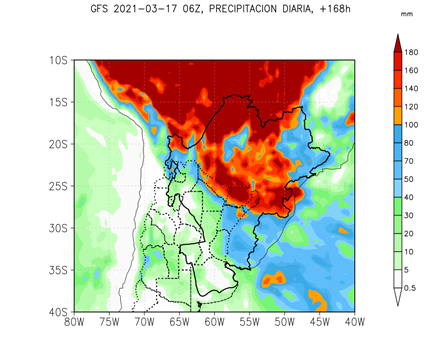 Situation at Vicentin berth and crushing plant: The berth in San Lorenzo, and the crushing plant owned by Vicentin are today administrated by the Court processing the bankruptcy. It has been contracted to provide oilseed crushing and loading to third parties. At first the only contractor was Diaz & Forti SA until they declared bankruptcy on Feb 11th. Since then the installation is used by ACA (a large local Coop) and by Union Agricola de Avellaneda (a smaller Coop from North Santa Fe). The fresh news today is that the Vicentin sunflower seed crushing facility in San Lorenzo (Riccardone) has been contracted by UAACl to process a potential of 4,000 metric tons per day. It is also said that ACA has signed for crushing capacity until December 2021.

HSS Harvest 2021: The market is speculating that if China opts to purchase more Brazilian soya beans then Argentine crushers will have enough raw material (Soyabeans) to boost production and more meal will be available for export. It also means more soy oil, and hopefully biodiesel, will be available for shipment. Another positive note is that the rain over the maturing soyabean fields will lessen the impact of the drought.