ANNOUNCEMENT: As a result of our growing and supportive customer base we are pleased to announce our team is growing both at our Buenos Aires Headquarters and our recently opened Upriver Branch to continue to ensure customer satisfaction. We are pleased to welcome: Gabriel Alejandro Malagrino (Operator) and Agustin More (Boarding) to the team. Both have extensive experience in the Maritime Agency field and will be able to hit the ground running and assist in taking care of your Marine Logistics needs. Their contact details are in the attached Company Contact list.

River Parana draft. Forecast and recommendation: The flow of water in the River Parana remains steady. As mentioned yesterday, the River draft is expected to fluctuate at average 10 meters, 30 centimeters more or less. The rain fall in the River Parana catchment area is steady. What is changing is the back up effect of tides in the River Plate is now affecting as far up as Rosario. The last few days have been cold, with S-SE winds. Hence the closure of Recalada, Zona Comun and Necochea. The weather map below, mainly blue colored will have to change to red/maroon for a couple of weeks for the water flow to bring back the usual stream.
It must be stated, again, that keeping the maximum sailing draft in the 10 meter range is thanks to the hard work and talent invested by Hidrovia S.A. with their five dredgers working at critical passes. 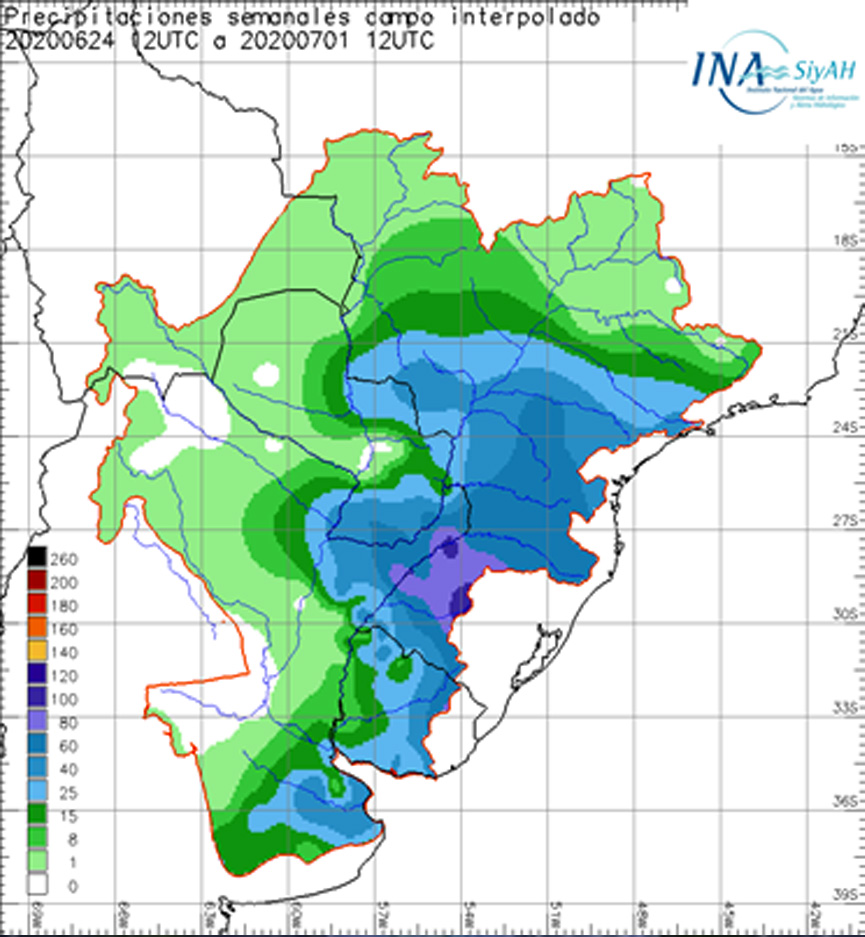 Vicentin: The efforts reported today were on the legal side. Political pressure is being placed on higher court officials to have the Chapter 11 trial brought down to Buenos Aires and therefore taken away from the judge at Reconquista where Vicentin has it’s legal domicile. Bringing it to Buenos Aires will allow political leverage to be applied. But the appeal court turned this down and the Reconquista judge maintains his local jurisdiction. On the other hand propaganda is working hard to try and create various legends about the company and it’s present share holders.

Maize, soya meal and soya beans: At Upriver ports and terminals 3,419 trucks were reported, of which 1,855 were maize and 1,507 were soya. Cargill Punta Alvear took in 34 wagons of maize. Bahia Blanca received a mere 745 trucks, of which 367 were maize and 334 soya. Additionally to this 45 wagons of soya beans.
The ratio is 32 tons per truck and 45 tons per wagon.

Covid-19 National Quarantine: As from July 01st and until July 17th Buenos Aires and the suburbs are being subjected to very strict quarantine.
The Province of Santa Fe has been relaxing the restrictions. This includes Arroyo Seco, Rosario, San Lorenzo and Timbues. But this means that all persons coming from City and Province of Buenos Aires will be subjected to a 14 day quarantine before being allowed to take up residence, even if it is for only one night. All towns have restricted access. Over the last few days vessels calling in the area have had to suspend or ask for extension to surveys because surveyors come from Buenos Aires.